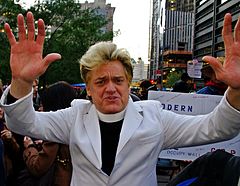 Reverend Billy is a character. That’s Character with a capital C. I first became acquainted with the Rev’s work, about five years ago, when I was doing research for a radio show that I did about International Stop Shopping Day. Stop Shopping Day is held every year on Black Friday, and in North America it’s the busiest shopping day of the year. When I saw some photos of Reverend Billy, (who looks like a blond Elvis, but in much better shape), doing exorcisms on Starbuck’s cash registers, I was hooked.

I went to his website and learned that the Reverend Billy started the Church of Stop Shopping in 1996. The Church is a “project of The Immediate Life, a New York based arts organization that uses theater, humor, and grassroots organizing to advance individuals and communities towards a more equitable future.”

Reverend Billy started out as a one-man performance artist preaching against consumerism on the sidewalks of Times Square. His Church of Stop Shopping has now grown into a 35-person choir and 7-person band. According to the Rev’,  “consuming less is the single most effective and immediate response an individual can take to immediately halting the climate crisis.”  Rev Billy and the Church have led many successful collaborative campaigns, among them the cessation of Boreal clear cutting by The Limited Brands, the recognition of Ethiopian coffee trademarks by Starbucks, and of course, his attempted exorcism of  Wal-Mart’s headquarters in Arkansas. 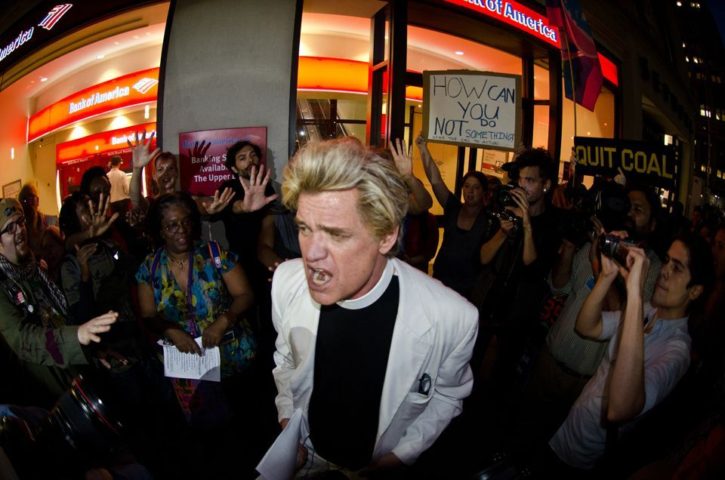 Reverend Billy’s esteemed mentor, actor and fellow Reverend Sidney Lanier, joined us for this interview. Reverend Sidney is a man of many talents. He started the American Place Theatre and was a co-founder of the Church of Stop Shopping.  Sidney is the cousin of Tennessee Williams and was the subject of his work “Night of the Iguana.”

KCSB Radio producer Ted Coe, and I met with Reverend Billy at Sidney Lanier’s book-filled house to discuss the collapse of the wall between church and theatre, how the Church of Stop Shopping was born, what it’s like to be arrested while handcuffed to a human-sized Mickey Mouse doll, and whether or not the Shopacalypse is upon us. Savitri D, the director of performances for the Church of Stop Shopping, was supposed to join us for the interview, but ended up being stuck in Los Angeles traffic.

My time with both Reverend’s was inspiring, invigorating, and entertaining. It was the most fun I’ve ever had with the clergy.

Listen to the Reverends’ Interview Part 1 and Part 2