Seaweed- Superfood of the Sea 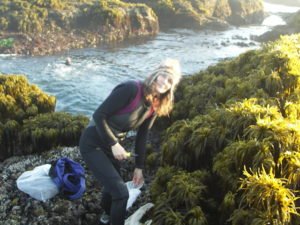 Episode 120: Seaweed is a superfood from the sea! Terry d’Selkie of Ocean Harvest Sea Vegetable Company tells us about the many benefits of seaweed. An algae, seaweed is high in vitamins, amino acids, minerals, and fiber. Terry introduces us to many different types of seaweed, including Kombu, Sweet Kombu, Ocean Ribbons, Sea Palm, Pacific Coast Wakame, Wild Nori, Fucus, and Turkish Towel.

Terry also tells us how to ethically harvest, dry, and cook seaweed. Seaweed is also medicinal and can be used in compost tea and fertilizer.

Many people are concerned about the safety of eating seaweed after the Fukushima nuclear disaster. All of the seaweed that Terry harvests is tested by an independent lab for radiation and so far has tested negative for radioactive isotopes.