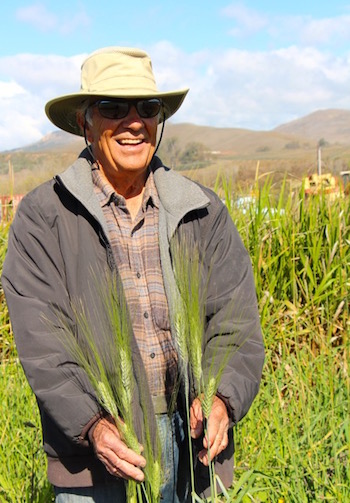 Episode 141: Larry Kandarian is an organic farmer and ancient grain advocate. In this episode, Larry takes us on a whirlwind tour of Kandarian Organic Farms where he grows over 200 varieties of plants. As you’ll hear in the interview, Larry is a man with a mission- growing the most ancient and nutrient-dense grains he can find and providing the world with alternatives to modern wheat.

I first became aware of Larry and his work when I saw an ad for a talk he was giving at our local seed swap entitled, “Ancient Guy Talks About Old Grains.” When I read that, I knew I wanted to interview him!

Larry Kandarian has been farming for over 25 years. A former mechanical engineer, who worked on the Space Shuttle, Larry is now committed to growing ancient grains in the most ecological way possible.

Margie Bushman of the Santa Barbara Permaculture Network and I spent a few hours with Larry last Fall. We talked with him about many plants including: Ethiopian Blue Tinge Farro, Terrestrial Rice, Einkorn, Fonio (also known as Grain of the Universe), Khorasan, Nude Oats, Quinoa, Sonoran Wheat, Tibetan Black Barley, Purple Corn, Kaniwa, Sorghum… the list goes on. Walking around Kandarian Farms is like being at Costco on a Saturday afternoon, there are lots of samples. It was a fun, delicious, and inspiring tour.

We also talked with Larry about gluten and why he believes that some of his crops may provide a delicious and nutritious alternative to modern wheat for those with gluten-sensitivity.

Note: Since this was recorded outside, you may hear wind and farm machinery during parts of this interview.

Learn more about Larry Kandarian and his amazing grains at KandarianOrganicFarms.com.