Raptors and Rodenticides- the Unintended Consequences of Rat Poison 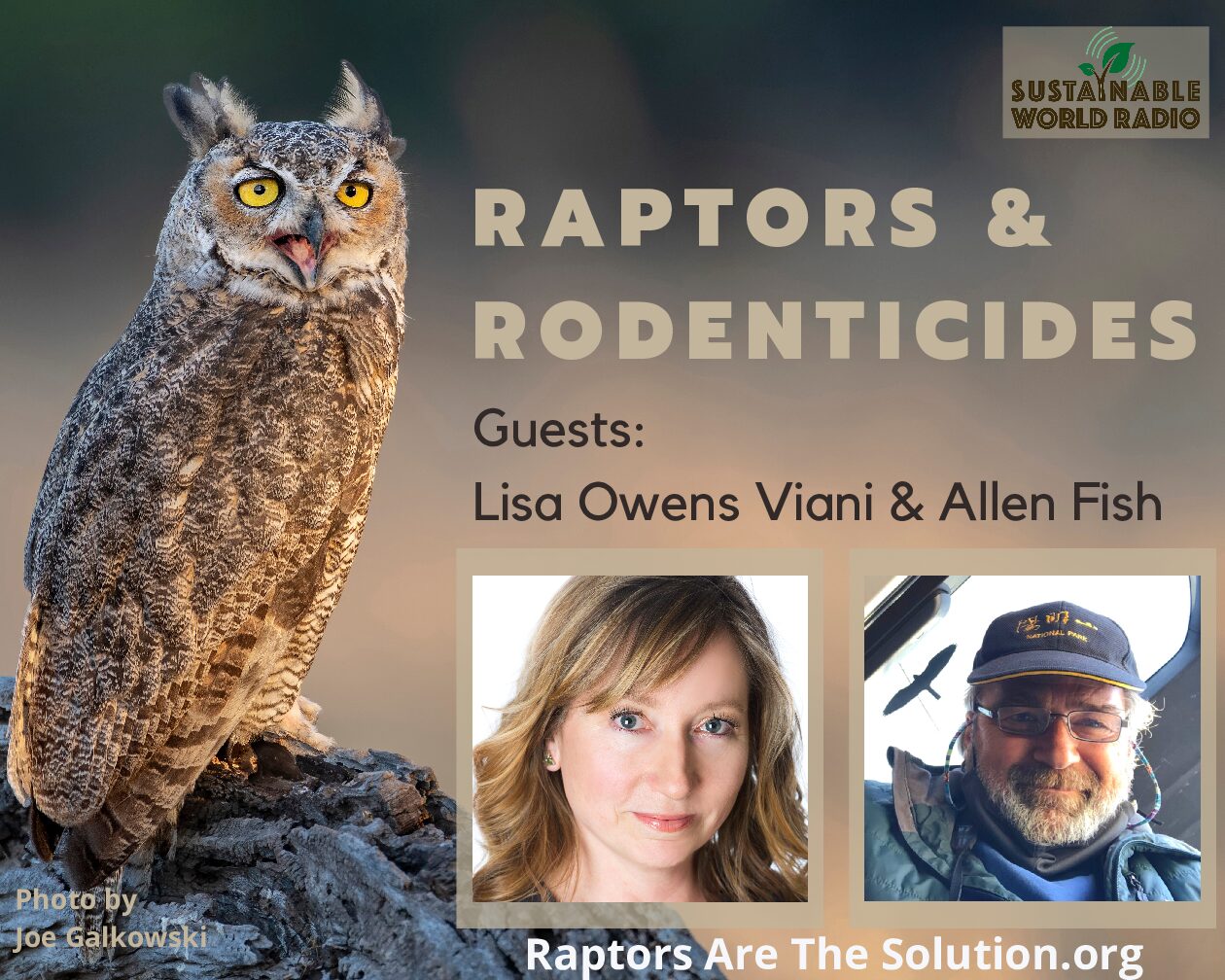 Episode 164: Are you a fan of Raptors or birds of prey? Members of this large group of magnificent birds include hawks, eagles, falcons, and owls. For many of us, seeing raptors in cities and in the wilderness is awe-inspiring.

To learn more about these amazing birds, I am joined by Lisa Owens Viani and Allen Fish, co-founders of the nonprofit Raptors Are the Solution (RATS).

We begin by chatting about the wonders of raptors and why Lisa and Allen have devoted so much of their lives to helping these birds. We then discuss the impact that anticoagulant rodenticides is having on raptors and wildlife.

The overgrowth of rats is caused partly by a lack of predators. We talk about how the poisons we use to control rats end up harming or killing the very predators that are efficient at keeping rodent populations in check.

This interview contains vital information about how we can be better caretakers of our shared environment. All of us can take action to protect raptors and wildlife from anticoagulant rodenticides.

What can we do? Start with avoiding the use of toxic rat poisons. Don’t make your yard a rat haven. Exclusion, sanitation, and trapping are effective nontoxic methods of rodent control.

Visit the Raptors are the Solution website for tips on how to make your yard less attractive to rats, educational resources, an activist toolkit, and more at raptorsarethesolution.org

Lisa Owens Viani is a long time environmental writer and wildlife advocate. Lisa co-founded and directs Raptors Are The Solution- or RATS, a project of Earth Island Institute.

RATS educates about the ecological role of raptors and the enormous danger that they and all wildlife, as well as pets and children, face from the wide use and availability of anticoagulant rat poisons. RATS partners with other agencies, scientists, municipalities, and NGO’s to work toward eliminating toxic rodenticides from the food web. RATS’ multi-pronged approach includes public education as well as legislative and legal work to achieve better regulation of these products.

Lisa Owens Viani was honored as the Fund for Wild Nature’s Grassroots Activist of 2021 and received a Special Achievement Award on behalf of raptors from the International Owl Center in 2018.

Allen Fish is the Associate Director for Conservation and Community Science at the Golden Gate National Parks Conservancy.

Allen was a Lecturer at UC Davis from 2003 to 2011 where he taught Raptor Biology. Allen has a long history of writing and public speaking on raptor biology and conservation, urban wildlife ecology, climate change impacts, and the power of community science. Allen was awarded Bay Nature’s Environmental Educator of the Year Award in 2016 and Golden Gate Audubon honored Allen with the Elsie Roemer Award for Conservation in 2020.

In 2011, Allen assisted Lisa in founding Raptors are the Solution. Allen lives with his family in Berkeley, and has recently become obsessed by the lives and ecology of dragonflies.

Note: I was inspired to pursue this topic when I noticed that I wasn’t hearing as many owls at night in my neighborhood. When disoriented rats began stumbling around our yard during the day and several were found dead in our yard, I did some research and discovered that rat poisons or anticoagulant rodenticides were the likely culprit-not only responsible for the dying and dead rats, but also for the decreased owl numbers.

I decided to write an article Silent Night- The Unintended  Consequences of Rodenticides and in doing my research, I discovered Raptors Are the Solution (RATS).

Raptors Are the Solution or RATS