The Last of the Non GMO Corn Speaks Out!

A Conversation With Corn

J (Jill Cloutier)-  Thanks for taking the time to talk with me today.  Tell me a bit about your background.  Where were you born?

Corn (C)-  My name is as  Zea mays.  I’m a member of the Poaceae family, the grass family.  All cereal grains belong to my family, including wheat, rice, and rye.  I’m an Annual, a monocot, and believed to have been  born in Mexico thousands of years ago.  Like anything that’s been around for a long time,  I’ve had my ups and downs.  For millennia, I roamed the earth. My seeds were saved and passed down from generation to generation.  I was venerate and revered and used as food, fiber and in ceremony.  But, now that  Monsanto’s got a hold of me, I’ll never be the same.

J-  That brings me to the issue that I wanted to talk with you about today.  Genetic modification and the large role that you’ve played in this controversial topic.

C-  I didn’t volunteer for the job.  I never asked to be modified.

J-  What does it mean when something is genetically modified?

C-  It’s a laboratory process where the genes from the DNA of one species are taken out and put into the genes of an unrelated animal or plant.  The genes can be from insects, animals, humans, bacteria, or viruses.

C-  At first, my reaction was one of complete and utter despair.  But now, I’m pissed.

J-  Why?  What happens when you are genetically modified?

C-  This gets a little personal, but basically it can happen in a number of ways, genes can be shot from a gene gun into a plate of cells.  Or bacteria are used to invade cells with foreign DNA.  The changed cell is cloned into a plant.  Most commonly, a gene from the bacterium Bacillus thuringiensis  is injected in me, so I secrete an insecticide that kills corn root worm pests.

J-  I have no idea what that means, but it sounds terrible.

C-  I’m a food crop that’s bio-engineered to produce my own internal insecticide.  Quite frankly, it’s abusive.  I’d rather have a rootworm eating me then be violated like this.

C-  Oh yes, worldwide, an estimated 395 million acres or 160 million hectares are planted with biotech or GM crops.  In the United States, more than 165  million acres have been planted.  Most non-organic corn, soy, and sugar beets contain genetic organisms.  In fact, more than 90% of the soybeans, canola, and cottonseed grown in the US are genetically engineered.

J-  So I could be eating genetically modified organisms or GMO’s without knowing it?

C-  Not only eating them, but wearing genetically modified cotton, and using GM cosmetics, like soap and shampoo.  In fact, about 75% of the processed food in the US contains GM ingredients.  That meat substitute you love?  Most likely, GM soy.  Those hard cheeses you buy?  90% of the rennet used to make them is GM.

J-  I’ve never seen genetically modified organisms listed as an ingredient on any of the food that I buy.

C-  That’s because labeling isn’t required in the United States.  Even though over 40 countries worldwide, including the European Union, Japan, New Zealand, and Australia, require mandatory labeling of GMO’s.

C-  Monsanto claims they are, but studies are now proving that GM products can have dire consequences not only in the environment at large, but also on animal and human health.

Have you heard of Roundup Ready GM crops?  These seeds are one of Monsanto’s best-selling products and include Roundup Ready soy, canola, alfalfa, cotton, and sugar beets.  Roundup Ready GM plants are genetically engineered to resist the weed killer Roundup.  Manufactured by Monsanto,  Roundup is the world’s best-selling herbicide.  Farmers who purchase and grow these seeds can spray Roundup directly onto their crops.  Even though Roundup is a toxin designed to kill plants, the crops won’t die since they’re “ready for roundup.”   Their selling point was that farmers could increase their yields since weed growth would be reduced.  For example, Monsanto says that Roundup Ready alfalfa will produce a higher quality hay and forage because of fewer weeds.

The problem is that the increased use of Roundup is having unintended consequences.  Research is showing that glyphosate, one of  RoundUp’s active ingredients,  is not as benign as once thought.  In ads Monsanto claimed that Roundup was “biodegradable” and “safer than table salt.”  But, some researchers have found glyphosate to be an endocrine disruptor that can cause reproductive problems in humans.  Other studies have demonstrated that Roundup causes DNA damage and birth defects in laboratory animals.  It’s also been shown  to have a detrimental effect on beneficial soil organisms, which play an important role in plant and soil health.  A USDA study found that repeated use of glyphosate affects the root structure of plants and may cause fungal root diseases.  Runoff from GM fields where Roundup use is intensive could have a negative affect on the health of our waterways.  Other problems include the cross-pollination of GM plants with non GM plants, resulting in wild GM plants that can spread.   Some weeds are also developing a resistance to Roundup and glyphosate.  Farmers are losing acreage to these so-called “Super Weeds.”  Pollinators have also been adversely  affected by GM crops

Speaking of Monsanto, their  GMO sweet corn, a new product by the way and found at your local Walmart, is engineered to produce the insecticide Bt and to tolerate Roundup.  Studies have shown, including one by the International Journal of Biological Sciences, that ingestion of Monsanto’s GMO corn led to organ damage in mammals.  The corn has also been linked to a pathogen that can cause crop failure and livestock infertility.

To top it all off,  many of the seeds from GM crops are patented and have to be purchased from companies like Monsanto.  If you try to save seeds for future planting you could end up getting sued by a multi-billion dollar corporation.  Since 1997, Monsanto’s filed 145 lawsuits against farmers.

J-  There is the argument that GM foods are not that much different from gardeners creating hybrid plants.

C-  I’ve never seen a gardener splice the DNA of a fish into a tomato.  Plant breeders crossed organisms whose genetic makeups were similar. Today,  genes can be transferred between species that aren’t related at all.  Hybridization may take time and trials, but it doesn’t require a clean room, microscopes, a gene gun, and the DNA of an Arctic flounder.

C-  I’m just a plant.  I shouldn’t have to be concerned about these things.  I should be outside, growing with the sun on my leaves, turning sunlight into food.  That’s really incredible if you think about it.  I have my place and it’s not being spliced and injected with poisons that can’t be washed off.  This Bt thing really bums me out.  I’m tired of being laced with pesticides.  I should have insects crawling around me. Some of them actually help me grow.  I want my integrity and my health back.  I want my reputation restored.  My former job was to feed and sustain.  Now, look at me, I’m a genetic wreck.

C-  Boycott companies that sell GM seeds and manufacture GM food.  Demand labeling of GM products.  Support local farmers who care for their soil.  Try to avoid ingesting the top GM crops- corn, soy, canola, and sugar beets.  The problem is these GM crops are found in most processed food.  Look for grass-fed organically produced beef, poultry, and dairy.  A lot of the animals that people eat are fed a steady diet of GM corn and soy.

If you live in California vote for Proposition 37 that would require clear labels that let consumers know if the food they are eating contain GMO’s.  If the proposition  passes in California it could set a precedent for other states to follow.  Take a look at the companies that are against labeling and avoid their products.

J-  Anything else you want to add?

C-  I think my days as an integral, health-giving plant are numbered.  This is a case of corporate-sponsored botanicide and it seemed like no one cared until recently.

Even worse is the idea that I’ve been patented.  That’s really the last straw.   Corporations making fat checks off my demise, fiddling with my DNA and making food that makes people sick.   Hands off “Monsatan”, this is war.  Leave me alone.  Let me grow in peace and continue doing what I’ve been doing for thousands of years.

C-  When it’s warm enough, go outside.  Plant a few rows of me in the ground.  Use organic, heirloom varieties of corn, if you can still find me.  In a few days, I’ll emerge.  Then help me grow.  Feed the soil, that’ll feed me.  Once I’ve matured,  eat and enjoy me.  But, please save some of my seeds and pass them around.  Ensure that I survive, it’s up to you.

J-  Thanks so much for your time today and all of your long years of service.  My friends and I will do everything we can to help you.

C-  You’re welcome. You might want to talk to my old friends soy and sugar beet, those two are really screwed and could use your help.

5 Comments on “The Last of the Non GMO Corn Speaks Out!” 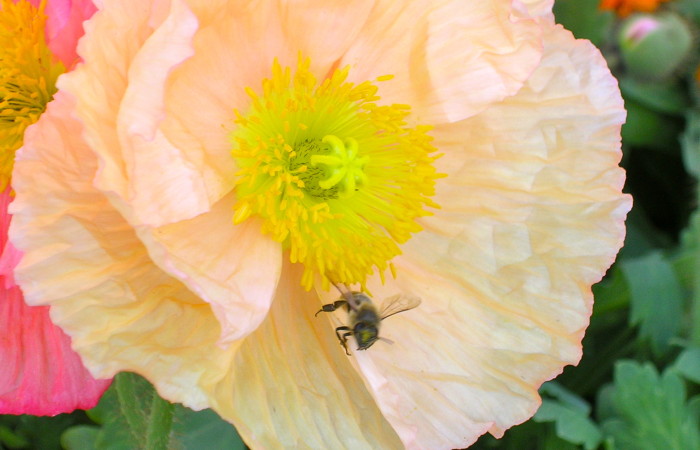