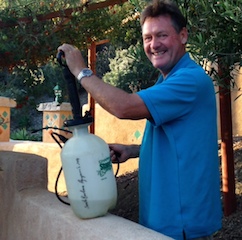 Episode 107: Aquaponics is a food production system that is a combination of aquaculture and hydroponics. In this episode, Kevin Childerley, owner of Santa Barbara Aquaponics gives us a tour of his thriving aquaponics system located in a parking lot! Kevin is growing a variety of leafy greens, tomatoes, and the prettiest heirloom lettuce I’ve ever seen (called Grandpa Admires). His organically produced plants grow in water that is fertilized by Channel Catfish.

The promise of Aquaponics is that a lot of food can be grown in urban areas or in places with little or no soil.

Since the interview, Kevin has made some changes at Santa Barbara Aquaponics. He’s making his own compost tea and is well on the way to making his own fish food. He’s capturing rainwater onsite to use in the system and he’s expanded his operation by building more grow beds and a much larger pool for his beloved catfish.